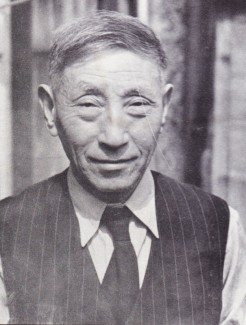 We have been fortunate to acquire a collection of works by the Japanese artist Ryuson Chuzo Matsuyama (1880-1954). He was a member of a small but intriguing group of Japanese artists working in England during the first decades of the 20th century. While the best known of this group are the printmaker Urushibara Mokuchu and the illustrator Yoshio Markino, Matsuyama is arguably the more interesting, bringing a freshness of practice and perception to the essentially British art form of watercolour. He also adopted Britain as his home, marrying an English girl, Mabel Davies, in Chelsea in 1914, and bringing his family up in London and the Surrey countryside. Unlike the great majority of the Japanese expatriate community, who left the UK to return home in the face of increasing anti-Japanese feeling in the 1920s and ‘30s, Matsuyama remained in England, becoming a naturalised British citizen in 1947.
After initial training in a broad range of media, as well as receiving an introduction to watercolour in Tokyo, Matsuyama travelled to England in 1911 to develop his knowledge and practice. We have two small sketches produced during his journey – recording scenes in Singapore (shown here) and Marseilles. 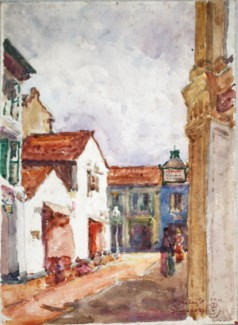 Settling in London, he, like the painter Sato Takezou, studied at the Chelsea School of Art, while also working as a decorative painter, restorer and lacquer repairer. His watercolours of London scenes found a ready market within the Japanese community, and he exhibited regularly at the Japanese Club in Cavendish Square, showing alongside his compatriots as well as artists such as Frank Brangwyn and George Clausen, who were active supporters of the group of Japanese artists. He was also an active and successful member of the British art world, exhibiting from 1916 at the Royal Academy, the Royal Scottish Academy, the National Portrait Society and regional art galleries. He was a member of the Holborn artists’ society and was elected an Associate of the British Watercolour Society – an honour he was asked to resign in 1947 in the aftermath of World War II – a shameful act by the Society, which coincided oddly with his receipt of British citizenship

As well as London scenes, Matsuyama’s earlier subject matter includes floral still-lifes, reminiscent of prints by Urushibara, and an aesthetic in landscape and genre scenes which seems to owe much to the Japanese shin-hanga movement. He undertook a range of painting tours to archetypal picturesque areas such as North Wales, the Lake District and the South West, but also visited Flanders and Northern France in 1920, recording the devastation wrought by the First World War, as shown in his view of Ypres (right). 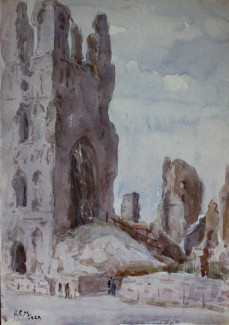 It is perhaps his mature work of the 1920s and ‘30s that is most striking, He seems to have taken delight in the colours, activities and seasonal rhythms of the English countryside, recording particularly the landscapes of Surrey and West Sussex. His landscapes are rich, authoritative and idiosyncratic: flooded with saturated colour, applied from a heavily laden brush, and contrasted with precise, calligraphic linear outline.

Most are carefully annotated with place and date, and convey real pleasure in the subject,  sometimes recording favourite places or walks. Much of his work is subtly imbued with a charm and gentle humour – more obviously seen in his cartoon of the family (noticeably excluding Mr Matsuyama himself) struggling to hoist the roof onto the family’s new shed.
While much is documented relating to Japanese ceramic artists working in Europe, particularly those associated with Bernard Leach, too little is known of the community of Japanese painters, printmakers and illustrators working in London at the beginning of the 20th century. The work of Matsuyama and his contemporaries deserves more serious research. 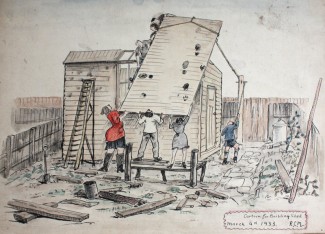 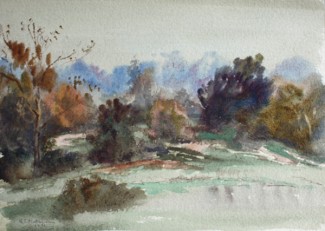