An exotic chocolate box for A J Caley of Norwich 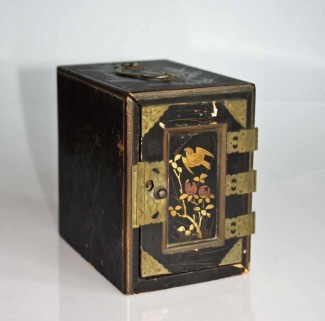 The firm of A J Caley of Norwich were manufacturers of jolly things in the 19th and 20th centuries – making mineral waters, Christmas crackers and chocolates. Still going strong in the twenty-first century, they reintroduced their classic chocolate ranges in the 1990’s, moving to Fairtrade products in 2006. But our little box (one of two identical pieces – both now sold) seems to be associated with their early ventures into chocolate making.

It bears a label from their Fleur de Lys factory, built in the Chapelfield area of the city in 1890, which suggests that the box was used as a form of high quality packaging. Although the box itself is fairly simple, it would still have made a very expensive form of mass packaging, specially imported and nicely finished. So perhaps our box was intended as a specific gift or promotional piece. Caley’s set great store by the quality of their chocolate, the recipe for which was intended deliberately to compete with imported Swiss milk chocolate, so maybe dressing their still-relatively new chocolate (they only started making milk chocolate in 1883) in a flashy box was all part of the market positioning.
It’s relatively unusual to find imported objects being used as commercial packaging. Porcelain ginger jars and packaging for tea and so on can be beautiful and elaborate, but they were imported together with their contents.
It’s a bit of a mystery really.