Little is known of the life of Victor Mathias, a prolific and idiosyncratic British artist. Tentative life dates of 1898-1987 and 1890-1960 have been suggested, and he is said to have been born and to have grown up in the town of Haverfordwest, in South West Wales. The town certainly provided many subjects for his early works, painted in a loose, 20th century Impressionist style.

It has also been suggested that, as a result of experiences in the Great War, Mathias later followed a reclusive and solitary life, with painting becoming an almost obsessive activity. He certainly painted on any piece of card which seems to have come to hand. Pictures with Lloyd Ellis have been painted on bits of old cardboard representing cut up boxes for anything from Bisto, to sugar cubes, Pontefract cakes, and Mexican Matzos. 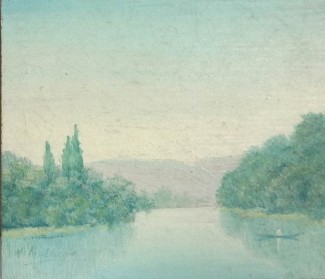 His small paintings on these pieces of cut-down card are remarkable. Rarely more than 16cm square, they are carefully signed and dated, and painted with confidence and bravura in a kind of urgent visual shorthand. Dabs of paint and a mixture of fluid and dry media are built up to give a rich texture and tonal range. The great majority represent an ideal landscape – calm river scenes, suffused with a golden light, dreamy detail and soft treescapes fading to mountains in a dim blue distance. The same scene is painted repeatedly, with delicate variation of viewpoint and detail. Reminiscent of southern France, it seems unlikely that the views could have been painted from life – particularly since most dates fall within the years of the second world war. Perhaps they represent a happy memory or a conjuring of such idyllic  places as an escape from wartime Britain.

Other small works show a more naturalistic approach to landscape, freely painted, they have the quality of quick, plein-air sketches. 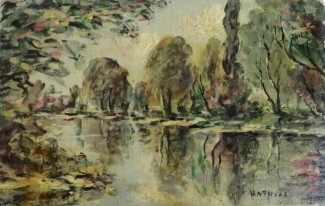 But who was Victor Mathias? So far no searches of census, war records or family history have offered a possible lead. He is an enigma, who deserves further investigation.