A Collection of Works by William John Caparne

Lloyd Ellis has acquired a collection of pastels and watercolours by the artist and horticulturalist William John Caparne (1855-1940).

This idiosyncratic polymath offers one of the least acknowledged and most intriguing stories of English art in the first half of the twentieth century. Our collection largely dates from the 1930s, a period when his art reached a new sophistication and maturity. His use of soft, rich colour and a misty, atmospheric evocation of coastal landscapes around his home in southern Guernsey, together with brilliant portraits of the flora to which he devoted so much of his life are deeply influenced by French Impressionism and the later works of J M W Turner.

After training at the Slade in 1874, Caparne moved to Paris to study at the Ecole des Beaux Arts and the Académie Julian, subsequently taking the post of drawing master at Oundle School. At the same time, he began to develop his life-long passion as a plantsman and horticulturalist. Following in his father’s footsteps, he began to specialise in irises – an area in which he later achieved global renown.

In 1895, following the death of his wife, and his departure from Oundle, Caparne left the East Midlands, initially for Devon, (changing his name from Caparn to Caparne) and then to the Channel Islands, and Guernsey, where he eventually settled at Bon Port near St Martin in 1920. He continued to develop his work as an iris and bulb specialist, creating the completely new variety of intermediate bearded iris in the 1890s. Working from his self-built bungalow and a studio and greenhouse made from an old tram carriage, he gradually transformed his immediate surroundings into one of the most beautiful gardens on the island, and himself into an accomplished landscape and botanical artist.

His transformation from a slightly staid English watercolourist to an inventive painter of light and manipulator of saturated colour owes much to a number of visits to Claude Monet and his circle at Giverny during the first decade of the twentieth century. He and Monet struck up a friendship after a visit to Giverny inspired by Caparne’s admiration of Monet’s depiction of waterlilies. On subsequent visits, Caparne presented Monet with (inevitably) a collection of iris bulbs, receiving a Monet drawing in return. It seems to have been at Monet’s suggestion that Caparne embarked on a series of tours of France and Europe before the First World War. 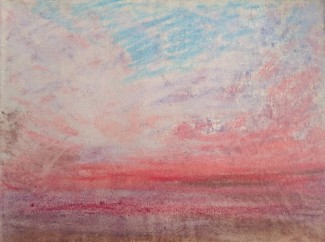 In the 1930s, with failing eyesight, Caparne produced many views of the sea and coast of south Guernsey, as well as studies of the cacti, succulents and South African flora which increasingly formed his horticultural interest. The great majority of these works were intended for his own reference and pleasure. Few are signed or dated, in contrast to the meticulous record-keeping of his earlier work and more precise botanical studies. The majority of our works fall into this category – freely worked, evocative images, although indisputably by Caparne’s hand. It is likely that our collection, acquired as part of the stock in trade of a retired print dealer, originally formed part of the final dispersal sale of Caparne’s work in 1980.