We have been lucky enough to acquire a significant group of still images from the archive of the great pioneer British film maker Cecil Hepworth (1874-1953). The collection includes both portrait stills and stills from Hepworth’s extraordinary film output from the first two decades of the 20th century, including images from films now lost. The date of the photographs is unclear, but they appear relatively recent. The original film from which the copy images are taken is unknown.

Cecil Hepworth was both a pioneer cinematographer and technical innovator. A photographer, director, producer, screenwriter, actor and inventor of commercial film and sound techniques, he established himself as one of the principal figures of the early British film industry, and established the industry as one of the most dynamic and inventive in the world.

From setting up his first production company, The Hepworth Manufacturing Company, in Walton on Thames in 1899, his film output was prodigious. Commercial success came in 1905, with the wildly popular ‘Rescued by Rover’. Hepworth’s move into directing ‘feature’ films, collaboration with other production companies and the development of a stable of regular actors facilitated an increasingly ambitious range of work.

However, little of his work now survives. Following bankruptcy in 1924, his entire film stock was melted to retrieve the silver, destroying the great majority of one of the most important early British film collections in existence. Half a dozen films have been saved, together with around 85 previously known still images. 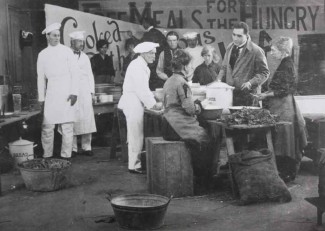 Our collection includes stills from several films for which no other evidence exists, as well as images featuring several of his ‘stars’, such as Chrissie White (1895-1989) and Henry Edwards (1883-1952). Many of the images are previously unknown, and not included in the catalogues of his work.

More information is available through the British Film Institute.