We have acquired three amazing paintings by the British artist Anthony Colbert (1934-2007). Although he is now known as one of the most successful illustrators of the later 20th century, in the mid-sixties Colbert was working for The Observer newspaper. In early 1967, he was commissioned by the paper and the charity Save the Children to travel to Vietnam to record the impact of the increasingly devastating conflict on women and children in the warzone. He travelled at a dangerous time. The Vietnam War was escalating rapidly: the bombing campaign Operation Rolling Thunder was flattening the North, and a ground war was building in lead up to the huge battles of the Tet Offensive in January 1968. What safe-conduct Colbert travelled under we don’t know, perhaps as a journalist. He wasn’t an official war artist, and, although the US Vietnam Combat Artists Program had already started, as a foreign non-combatant it is unlikely that he was able to link up with them.

He returned safely (miraculously!) in the summer of ’67, with a substantial body of work, which was exhibited at the Artists’ International Association galleries in August. The majority seems to have comprised rapid sketches on paper. Our paintings are three of only four oils in the exhibition, and they are dramatic and powerful works. In all the paintings, the figures float, isolated against a neutral background, reinforcing the sense of abandonment and helplessness of the subjects. The muted colours, the strange use of apparently military-issue khaki gloss paints and the violent physicality of the application of the oils (almost scrubbed on in some cases), all contribute to the sense of urgency and desperation which these works carry.

It would be great to learn more about this amazing episode of British charitable intervention into an American war. What, for example, did the Observer and Save the Children do with the knowledge and results which Colbert brought back?

Any ideas, please get in touch! 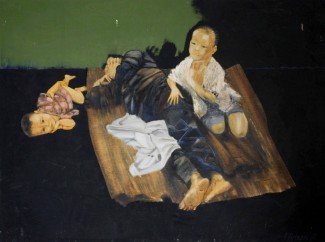