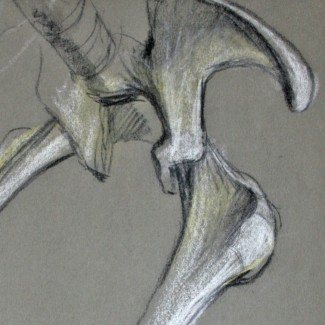 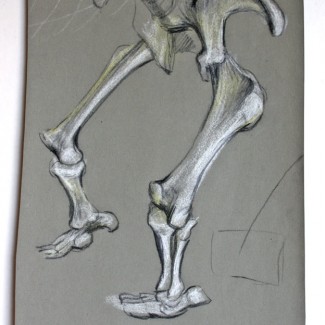 Study of the skeleton of the Diprotodon Australis

black and white chalk with touches of yellow on toned paper

Unmounted. The paper not cut square and with light creasing.

Acquired from the artist’s estate

The Diprotodon Australis is an extinct giant marsupial from Australia. A specimen is held by the Natural History Museum, London.

David Antony Weeks was a significant sculptor and educator, based in the South West of England who played an important role in the post-war reconstruction of Plymouth during the 1950s and early ’60s.

David Weeks’ work from the 1950s is figurative, with a powerful sense of mass and volume, and shows a strong awareness of the work of both Henry Moore and Graham Sutherland. His development of large-scale family and mother and child groups during the decade coincided with Moore’s exploration of the same themes.  During the later 1960s, Weeks became more concerned with formal, geometrical structures.

Read more about David Weeks and his work with Lloyd Ellis here.