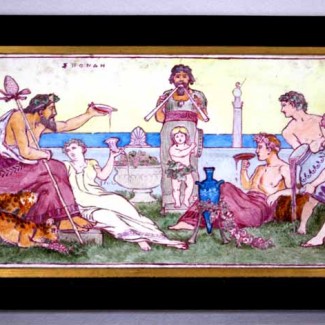 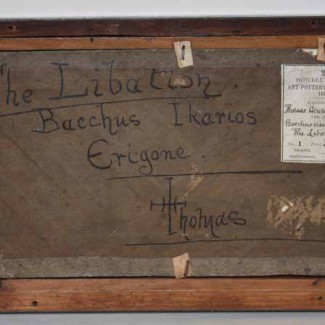 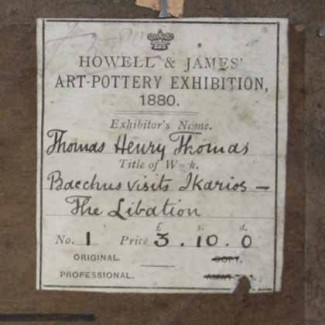 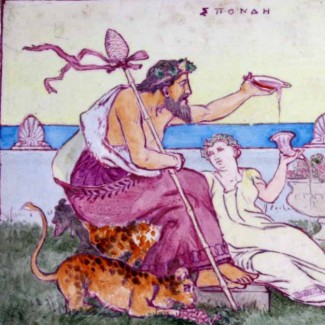 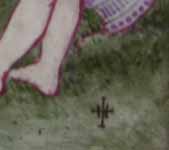 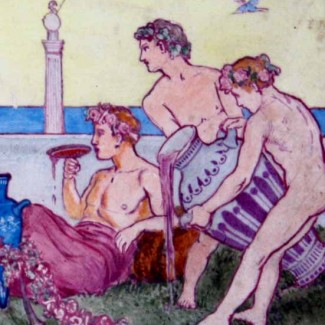 Thomas Henry Thomas was a painter and illustrator. After his return to Cardiff following travels throughout Europe, his house in The Walk became a centre of cultural interest and debate. Thomas was an ardent champion of Welsh nationhood and he was a key figure in the establishment of the Cambrian Academy, the National Eisteddfod and the National Museum of Wales. He bequeathed a major body of artworks to the National Museum, which formed the basis of a centenary exhibition on Thomas in 2015. We’ve only come across one other tile panel decorated by Thomas Henry Thomas, sold at Bonhams in 2008, but much plainer and more formulaic.

Howell & James, an established London firm of jewellers and clockmakers, extended their premises in the late 1870s, and in 1880 launched their first exhibition of art pottery for ‘Lady Amateurs’ and invited artists. Quite why they decided to move into the world of decorative ceramics we don’t know – possibly as a result of their increasing use of painted ceramic clock faces in their own production (including designs by Lewis F Day).They continued to present art pottery exhibitions throughout the first half of the decade. Presumably, Thomas Henry Thomas was an invited artist, although the standard of many of the surviving ‘amateur’ works is very high.

The subject illustrates the introduction of wine into the Helenic world by the god Dyonisius (or Bacchus), through his visit to the Attican elder, Ikarios. Ikarios proceded to bring the cultivation of vines and the consumption of wine to the Greeks, until he was clubbed to death by a group of shepherds, who thought he had poisoned them.