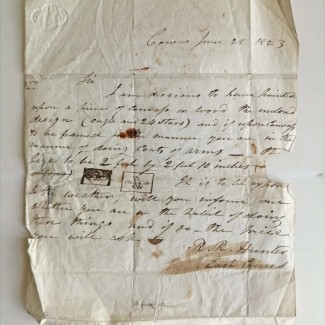 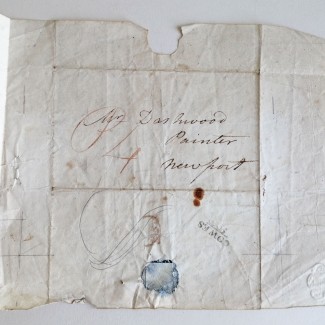 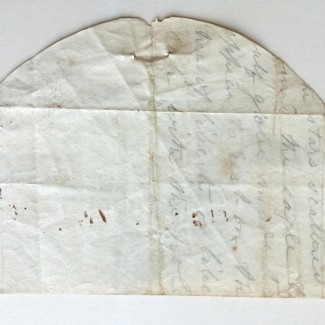 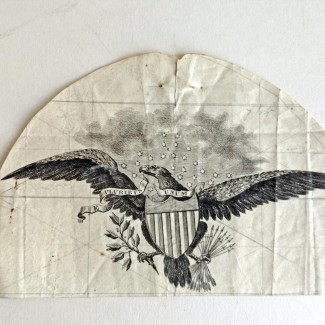 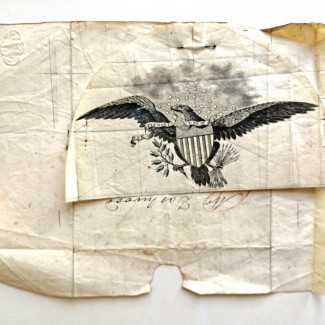 Categories: All Rooms, Other.

A semi-circular, slightly romanticized, engraved image of the arms of the US, 114 mm x 183 mm, is attached to the letter with a steel pin. The verso of the engraving has a fragmentary description of the arms in pencil.

The letter is franked COWES, but the original seal is missing

The letter is addressed to Mr Dashwood, Painter, Newport and reads:

I am desirous to have painted /upon a piece of canvas or wood the enclosed /design (eagle and 24 stars) and if upon canvas /to be framed in the manner you are in the/ manner of doing coats of arms – the/ size to be 2ft by 2ft 10 inches (a[n] oblong) [inserted sketch]. It is to be expos[ed]/ to the weather,  will you inform me/ whether you are in the habit of doing/ these things and if so – the price/ you will ask/R.R. Hunter/ East Cowes.

R R Hunter was U.S. Consul to Great Britain from the 1820s at least into the 1840s, based at East Cowes on the Isle of Wight, presumably dealing with maritime trade in the Solent and Southampton. The letter relates to a commission for a painted heraldic sign, either marking his new appointment or a replacement showing the newly-adopted 24 star blazon of the U.S. following the accession of the State of Missouri to the Union in 1822. Hunter appears in several documents of the period.

The letter is addressed to Mr Dashwood, presumably William Dashwood Sr, a successful portrait and heraldic painter, and one of the Dashwood family of painters living in Newport, the island’s principal town.

This is a unique item of historical interest with regard to both the U.S. and the Isle of Wight.