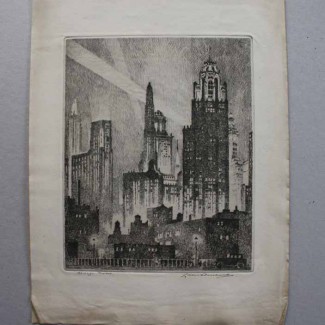 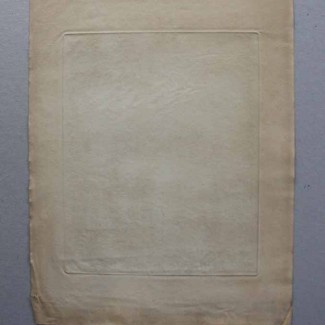 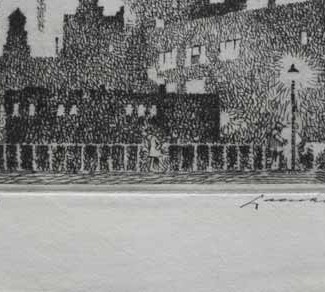 A strong, clean image with no foxing and good platemark. A small tear and creasing to lower right, small crease to bottom left corner and slight crimping to right edge. Light staining to extreme paper edges.

Leon R Pescheret was born in England, but emigrated to Washington with his family when his father became chef to the British Ambassador to the United States. In the 1920s, he trained at the Art Institute of Chicago, where he began to experiment with the etching process – a practice which came to dominate his output throughout his life. Some of his most important work is the series of extraordinary, dramatic and almost visionary images of the new towers being erected to the north of the Chicago river in the 1920s and ’30s. This iconic view of the North Side towers including the gothic drama of the Tribune Tower in the foreground with the pencil-thin Mather Tower and Bell Tower behind, and the Wrigley Building just visible to the right, is one of his best-known images.
These works (see our Wrigley Bridge in the Art Room too) are a powerful evocation of urban America in the early decades of the century.