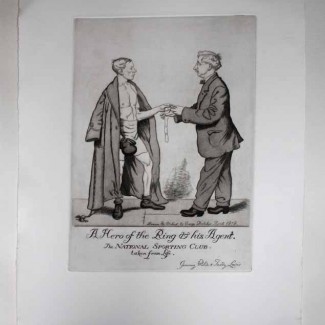 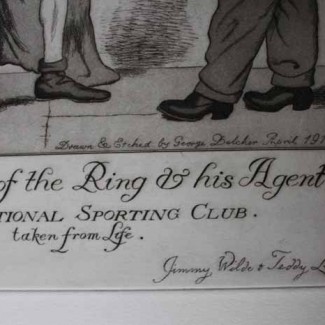 George Belcher (1875-1947)
Etching of the boxer Jimmy Wilde and his Agent, Teddy Lewis
A modern pull from the original plate
Inscribed in the plate: Drawn and etched by George Belcher April 1919
Titled: A Hero of the Ring and his Agent/the NATIONAL SPORTING CLUB/ taken from life.
One of a series of character studies produced for the National Sporting Club, 1917-1921
paper size: 52.0 x 37.5 cm
plate size: 34.5 x 24.0 cm

Jimmy Wilde (1892-1969), the original ‘Mighty Atom’, was the world’s first World Flyweight Champion, and has been described as the greatest British fighter of all time.
Versions of this image in the collections of the British Council and the National Portrait Gallery.