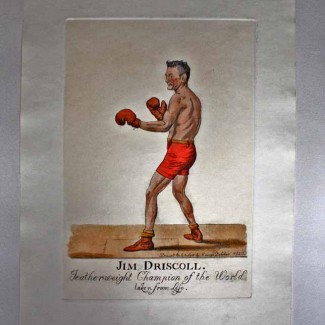 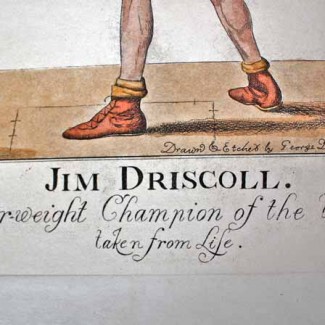 George Belcher (1875-1947)
Hand-coloured etching of the boxer Jim Driscoll
A modern pull from the original plate
Inscribed in the plate: Drawn and etched by George Belcher, 1920
Titled: JIM DRISCOLL/ Feather-weight Champion of the World/taken from life.
One of a series of character studies produced for the National Sporting Club, 1917-1921
paper size: 41.5 x 32.5 cm
plate size: 32.5 x 22.5

Jim Driscoll (1880-1925); ‘Peerless Jim’ was a Welsh boxer and British Featherweight Champion. Having fought triumphantly throughout the UK and United States, he died of consumption aged only 44.

Be the first to review “George Belcher RA (1875-1947), etching of the boxer Jim Driscoll” Cancel reply